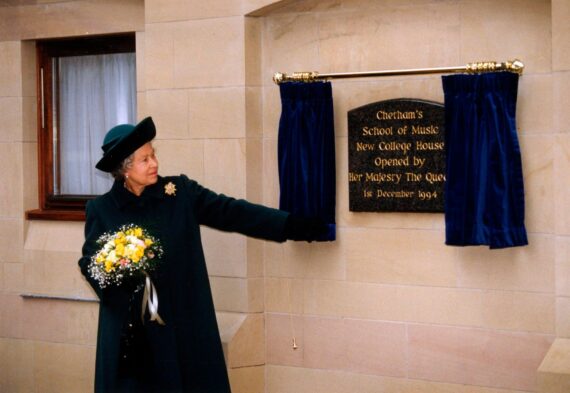 On 1 December 1994, HM Queen Elizabeth II visited Chetham’s to open the newly built New College House building. 1994 marked 25 years of Chetham’s as a specialist music school after having been an all-boys grammar school for several years; the opening of a new girl’s boarding house was therefore a momentous achievement for the school.

The new accommodation block was part of a £2.5 million redevelopment programme at Chetham’s, which also included the refurbishment of classrooms and practice rooms.

The Headmaster greeted The Queen and her Royal Entourage and guided the group on their visit to the Chetham’s site. Her Majesty met numerous Chetham’s students, many of whom were dressed in the traditional Tudor uniform, both outside on the school yard and inside the new boarding house. For many of these students, this day lives in their memories as a wonderful day filled with excitement and anticipation.

A photo of HM Queen Elizabeth II opening the new boarding house can still be found hanging on the walls of New College House today, as well as the plaque commemorating the official opening, paying testament to how special this occasion was to all involved.