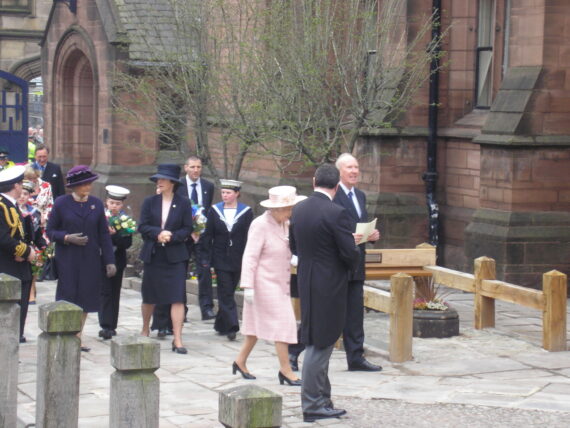 On 5 April 2007, Her Majesty visited Chetham’s as part of a visit to Manchester Cathedral for the Royal Maundy Thursday service.

The Royal Maundy is an ancient tradition observed by the Royal family in which the ruler visits a Cathedral or Abbey to give gifts to local people who have contributed to their community and church. Early in her reign, HM Queen Elizabeth II decided that the Maundy money should not just be distributed to the people of London, so she travelled to a different city each year for each service; in 2007, Manchester was the chosen Cathedral for the service, a great honour for the city.

Due to the historic connection of Chetham’s with the Cathedral, not to mention the proximity, a visit to Chetham’s was added to The Queen’s itinerary for the day. The service took place during the school’s Easter holiday, so not very many students were involved in proceedings, although a few local students came dressed in the traditional Tudor uniform to mark the occasion. Her Majesty, accompanied by The Duke of Edinburgh, attended a reception in the Baronial Hall following the service, before heading onward to Manchester Town Hall for lunch with the Lord Mayor and Lady Mayoress.

This was the last time HM Queen Elizabeth II visited the Chetham’s site.