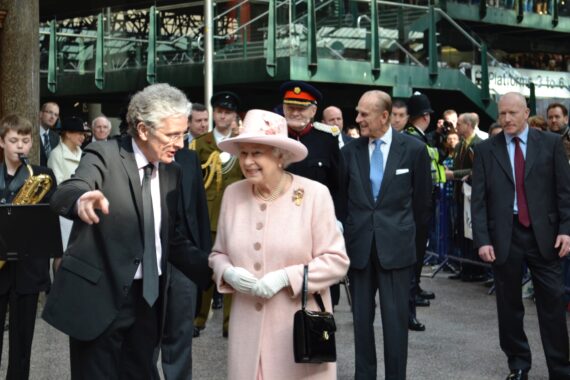 This was a day filled with music from several Manchester arts organisations, kicked off by students from Chetham’s. The Queen, accompanied by HRH Prince Philip The Duke of Edinburgh, arrived by train into Manchester Victoria station. As she made her way off the platform and towards the station exit, the Chetham’s saxophone choir provided her first musical experience of the day. She was greeted by the then Director of Music, Stephen Threlfall (1995 – 2019), who invited her to listen to the ensemble of young saxophonists, aged 12 to 18, play before making her way out of the station.

Later in the day she would hear music from the Royal Northern College of Music, the BBC Philharmonic Orchestra, and the Salford Family Orchestra.