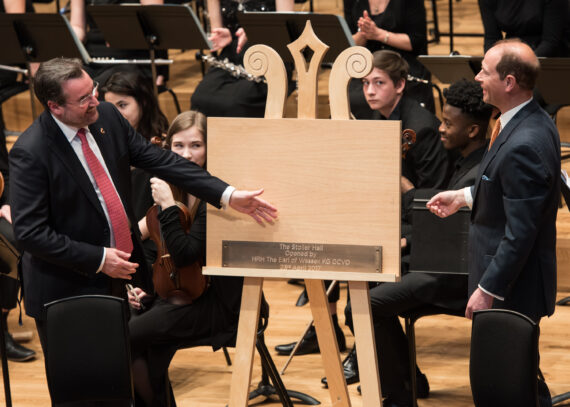 On 23 April 2017, Prince Edward visited Chetham’s to officially open The Stoller Hall as part of its opening weekend proceedings.

The opening weekend was one packed with events, including appearances from BBC Radio 3, Gwylim Simcock, and Sir Mark Elder and exciting events such as Outreach concerts and a Ted Robbins jazz concert. With the wide range of events programmed in such a way to show off the versatility of the Hall’s excellent accoustics, huge audiences were drawn to the new Manchester performance venue, helping to establish The Stoller Hall’s significant cultural footprint straight away.

Sunday 23 April marked the Royal Celebration Opening Concert, a dynamic concert featuring two orchestras of Chetham’s students, alumni, and friends. The concert began with a brass fanfare, specially commissioned for the event, before the Chetham’s Chamber Orchestra took the stage to perform Walton and Brahms.

It was at this point that HRH Prince Edward was invited onstage, accompanied by Headteacher Alun Jones (2016 – 2019), to unveil the plaque that would officially pronounce The Stoller Hall as open. The atmosphere of excitement was apparent when Prince Edward stood in front of an orchestra of Chetham’s students and marked the opening of a project at the heart of the school, and this excitement carried through to the music-making, resulting in an exhilarating concert enjoyed by all.

The second half of the concert was made up of an orchestra of Chetham’s staff, former students, local professionals, and a few guest students, under the baton of Sir Mark Elder. This incredibly special and personal ensemble brought the concert, and the Opening Weekend, to a dynamic and sentimental close. 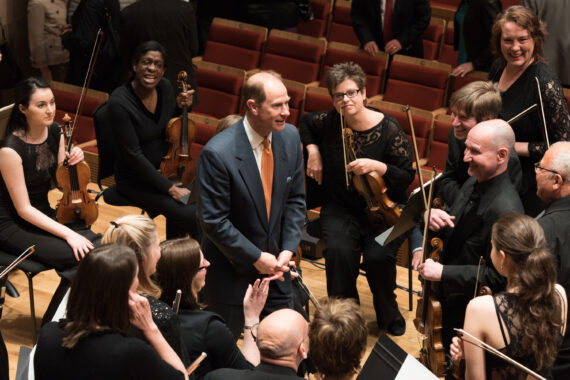