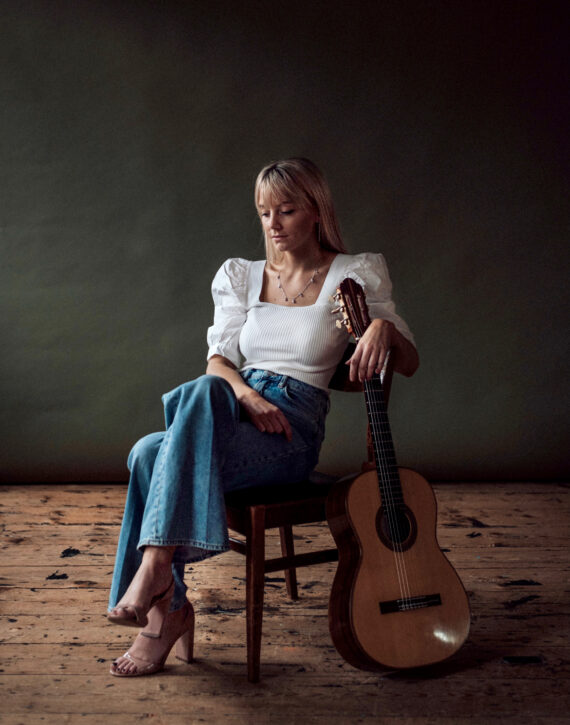 Alexandra Whittingham studied at Chetham’s for seven years, from 2008-2015, with classical guitar as her first study instrument. Now, she is enjoying a successful performing career with venues ranging from the British Embassy in Paris to Abbey Road Studios. She has also built up an impressive following on social media, with over 200,000 YouTube subscribers and a collective 30 million views of her videos.

We are thrilled to be inviting Alexandra back to Chetham’s again to take part in the Manchester Guitar Festival hosted by The Stoller Hall.

The Manchester Guitar Festival is taking place on 20-22 May, celebrating the finest guitar talent with three jam-packed days of concerts, talks, workshops and pop-up performances; encompassing everything from flamenco and acoustic to electric, jazz and blues, and even a few ukuleles! More info and tickets on sale via The Stoller Hall website.

Alexandra will be performing and giving a talk about classical guitar repertoire. To celebrate, we asked Alexandra to share some thoughts and memories about her time as a student at Chetham’s.

I owe so much to my time at Chetham’s. I have really fond memories of my seven years there and, although sometimes it could be tough, I believe that it really taught me how to work hard. When your peers are achieving great things and are so talented at what they do it also really inspires you to do your best.

One of the things I liked most about being at Chetham’s was the fact that I was surrounded by people who shared similar interests to me. I no longer felt like I was the ‘odd one out’ because I played a classical instrument and liked that kind of music. I’d also not spent time with other people who played the classical guitar before, so to have three other people in my year all learning the same instrument was really fun. Some of the best times I had there were the external guitar department concerts – the whole department got on so well which made them so much fun!

Last year I graduated from my Master’s degree at the Royal Academy of Music (where I also spent four years as an undergraduate) and now enjoy playing concerts and giving classes around the world. I also enjoy creating YouTube videos for my online audience which aim to give an insight into the life of a classical musician.

What advice would you give your past self?

This is definitely something I’ve thought a lot about before and (as cliche as it may be!) I think I’d say not to care as much about what others think. Whether that be of your playing, your taste in music or your artistic direction. It took me a while to realise that there isn’t a set mould for all classical musicians graduating college, and when this dawned on me I began to feel a lot more free. We’re beginning to see this corner of the music industry open up so much more and become more accessible; I’d love to see myself as a part of that.

I released my debut album on Delphian Records in May 2021. All of the planning and preparation was done during the first lockdown and we managed to record in October 2020. I’m really proud of this album as a lot of the music on there inspired me to pick up the guitar when I was younger, so to be able to record it later down the line felt really heart-warming. I also love the fact that it showcases incredibly popular pieces alongside some that people may never have heard before. I got to discover some real gems from lesser-known composers and now enjoy programming them in concerts.

There’s no doubt in my mind that I wouldn’t be where I am today if it weren’t for Chetham’s. I learned so many valuable lessons and feel like my time at the school helped shape me as both a person and a musician.

Without the bursary funding I received I would’ve been unable to attend Chetham’s, so I’ve always been incredibly grateful that this funding gave me that opportunity.