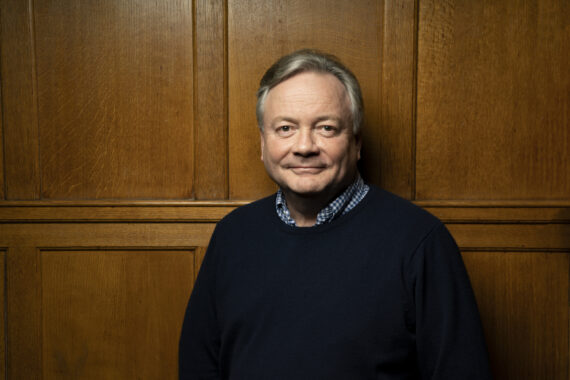 David Hill is a widely respected orchestral and choral conductor, currently working as Musical Director of the Bach Choir and International Chair of Choral Conducting at The Royal Northern College of Music. He was awarded an MBE in 2017 for his services to music. A student of Chetham’s in the 1970s, he has more recently served the school as a Governor and a Trustee, which he describes as his “way of giving something back to this great school of ours.”

Chetham’s provided me with the opportunity to develop musical skills at a pace and level I could not have otherwise experienced. It was a very brave, bold and ultimately hugely successful move on the part of the Trustees with whom I am proud to be associated. I received funding to study at Chet’s and wouldn’t have been able to take up my place without it. Ultimately, I doubt whether I could have had the career I am still enjoying without the role Chet’s played in my early years.

I was admitted chiefly as a violinist. I was secretly harbouring the idea of becoming an organist and when it was agreed I could take lessons I was very happy indeed. Learning music history, harmony and counterpoint and keyboard skills from John Leach and Robert McFarlane were such valuable hours of education. Also conducting the school Chamber Choir when I was 14 was such fun and unexpected experience which made me realise how much I wanted to conduct.

What advice would you give your past self?

I have always been very self critical. Whilst this is important to improve and develop, I wish I could have balanced it better as, oddly though it may sound, I lose confidence in my own abilities in certain situations. I cope with it but am aware of it.

I was always happy playing piano, organ, violin and being allowed to learn conducting when at school: nothing has really changed except I wouldn’t play the violin in public anymore! I am a freelance conductor and organist and occasionally accompany others on the piano. I have been fortunate to have been Organist and Director of Music at Westminster and Winchester Cathedrals as well as a Fellow and Organist of St John’s College, Cambridge. I was Chief Conductor of The BBC Singers for 10 years. I’m currently Musical Director of The Bach Choir where I succeeded Sir David Willcocks in 1998. I’m Associate Guest Conductor of The Bournemouth Symphony Orchestra and Professor and Principal Conductor of Yale Schola Cantorum, Musical Director of The Leeds Philharmonic. Teaching posts in addition to Yale are at the Royal Academy of Music and as International Chair of Choral Conducting at The Royal Northern College of Music.