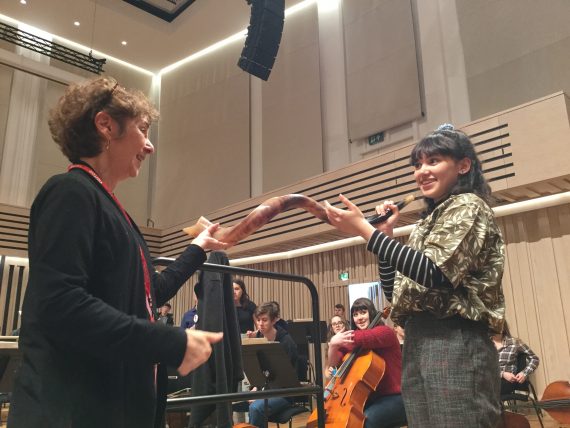 Young musicians from Chetham’s joined forces with players from across Greater Manchester and Nina Bernstein Simmons, youngest daughter of Leonard Bernstein, to celebrate her father’s centenary. Born in 1918, Bernstein wrote some of the most memorable music of the 20th century, from West Side Story to On the Waterfront. He was also a committed teacher, creating some of the very first Young People’s Concerts for broadcast across America. One hundred years after his birth, young players from Greater Manchester Music Hub and Chetham’s School of Music performed in two unique events celebrating his music and legacy.

The Bernstein Beat involved a full orchestra of players, all aged 18 and under. Hosted by Nina Bernstein Simmons, and devised by Bernstein’s three children, the event invited audiences of all ages to discover and enjoy the unforgettable rhythms and rich Latin flavours of Bernstein’s music. Extracts included music from On The Town, Trouble in Tahiti, Candide and West Side Story, with audience members invited onstage to discove the ‘hamburgers’ and ‘hotdogs’ that make up those incredible patterns. “We first performed The Bernstein Beat in 2008 as part of Bernstein’s 90th anniversary celebrations, and it was one of those especially memorable events – whether you were onstage or in the audience,” explained conductor Stephen Threlfall, Chetham’s Director of Music. “Led by Nina, local children, young players and audience members all combined in exploring the infectious rhythms, melodies and orchestral colours which are an intrinsic part of his Bernstein’s genius as a composer. Some of those involved were experiencing his music for the first time, others returning to old favourites, but everyone was instantly captivated by his music – and even had chance to join in at a few crucial moments! It’s particularly appropriate that the concert was performed by an orchestra of young musicians. The music was demanding but hugely rewarding – I’m sure they won’t forget it in a hurry!”

That might be particularly true for the young brass player who took up the Shofar, a ram horn flute which influenced Bernstein’s early compositions – and who received a private lesson from Nina herself in how to extract its sound!

Two days later,  Nina took to the stage a second time – on this occasion, introducing her father’s 27 ‘Anniversaries’ for piano. “They are miniature musical gifts,” continued Stephen; “each dedicated to a different one of Bernstein’s friends, relatives or colleagues, from Stephen Sondheim to Nina herself. Framed by anecdotes from Bernstein’s life, presented by his daughter, they form a remarkably intimate look into his personal life.”

Each Anniversary – some lasting barely a minute – was performed by a different piano student from years 7-10, following a rare screening of the 2005 documentary film A Total Embrace, which pays tribute to Bernstein’s life and music. “The whole evening was a chance to get closer to the brilliance and charisma that Bernstein brought to his life and work,” Threlfall continued. “We’re absolutely delighted that Nina Bernstein Simmons was be with us in person to lead our celebration of her father’s work.”

Away from Manchester, the celebrations continued. Five pianists also travelled to Leominster to perform Bernstein’s Anniversaries in their Music in Quiet Places series; and to Jersey Academy of Music where they performed alongside young singers and instrumentalists from the school and local area.