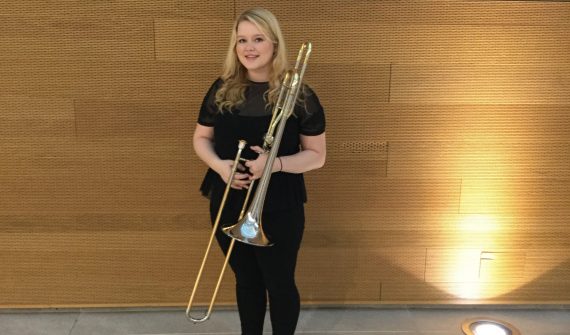 We are thrilled to announce that Chetham’s trombonist Isobel Daws has won the BBC 2 Young Brass Award for 2017.

The final, held at the Royal Northern College of Music and broadcast live on BBC Radio 2 on Friday 21 April, saw Isobel perform Rhapsody for Trombone and Brass Band by Gordon Langford accompanied by the world famous Foden’s Band and conductor Michael Fowles.

Congratulations must also go to the three other finalists, including another Chetham’s student, trombonist Ellena Newton.

Before announcing Isobel as the winner, the judges (David Childs, Philip Harper and Becky Smith) said they were looking for someone who could ‘Combine high quality playing with mature musicianship and that all important stage presence’.

This has been an exciting few months for Isobel, who was named as one of Chetham’s Concerto winners in February.

You can listen to the final again here.

Congratulations again to both Isobel and Ellena for their fantastic achievements.