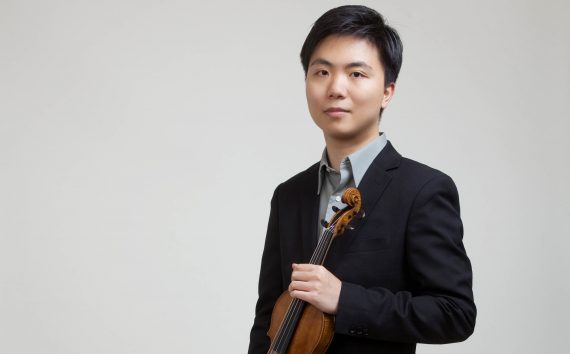 Born in Shanghai where Chen studied with Peter Shixiang Zhang, Jiyang Zhao and Lei Fang. He attended the Primary and Middle Schools Affiliated to Shanghai Conservatory of Music and the Chetham’s School of Music in UK and holds a Bachelor of Music (Hons) Degree from the Royal College of Music in London where he studied with Jan Repko and a Master of Music Degree from The Juilliard School in New York City where he studied with Cho-Liang Lin and Ronald Copes. He has also worked with Pierre Amoyal, Ana Chumachenko, Bernard Greenhouse, Boris Kurshnir, Itzhak Perlman, Vadim Repin and Ruggiero Ricci.

Chen’s artistry has also supported humanitarian causes, including the “East meets West” event organized by the British Red Cross. In 2008, he organized seven recitals in the UK and Italy where raised over £4800 ($7800USD) to give scholarships to students from Sichuan studying in Shanghai after the 2008 earthquake in Sichuan, China. He has also donated his services for fundraisers on behalf of English National Opera, Dance Umbrella International Festival and Royal College of Music Annual Fundraising events.

Chen teaches at the Chetham’s School of Music, Royal College of Music and the Birmingham Conservatoire. He is the music director of the Jiafeng Chen Music Studio which holds music summer courses in world’s leading cities since 2015. He plays a Nicolo Gagliano violin (Naples, 1751) kindly on loan from a generous group of owners.