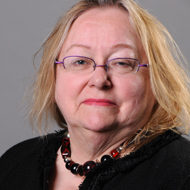 Joan was elected to Manchester City Council in May 2012. She is a member of two Manchester scrutiny committees: Finance and Economy. In addition, Joan has been part of short-term teams examining and making recommendations on the role of letting and managing agents, and the council’s approach to homelessness and street begging.

She is particularly interested in improving dialogue between the different interests operating in the city centre and ensuring that residents are well informed about their rights and procedures for dealing with problems, particularly from noisy premises and construction works. Joan represents city centre councillors on the Litter Strategy team and is delighted with the recently installed 600+ bee-emblem bins.

In addition Joan represents Manchester on the NHS Pennine Acute scrutiny team and is a member of a team reporting on the consultation process employed for the local NHS reconfiguration proposals ‘Healthier Together’. She is a Board Member of Z-Arts.

Joan moved to the Manchester area in the mid-70s and to the city centre in 2005. A retired Economics teacher with 39 years service, she now works occasionally as one of the city’s Green Badge tour guides and as a theatre writer for Manchester Confidential. She lives in Castlefield and was a founder member of Castlefield Forum.