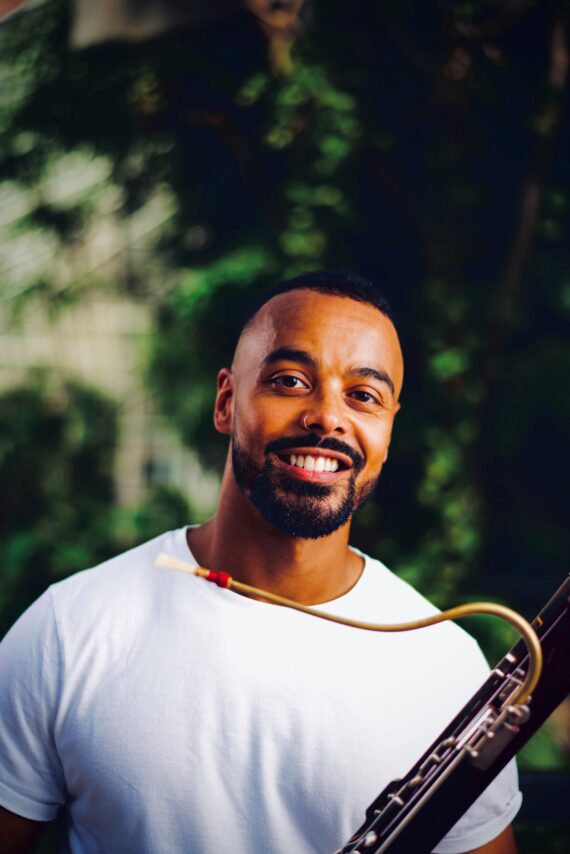 British/Jamaican musician Linton Stephens (He/Him) originally hails from the Wirral and took up bassoon at the age of 16. He went on to study as both a junior and undergraduate at the Royal Northern College of Music, and later as a prestigious Oglesby scholar for his postgraduate studies from which he graduated with distinction. After a short hiatus he continued his studies at the Hochschüle für Musik, Liszt Academie in Weimar, Germany.

As a freelancer, Linton regularly plays with many of the UK’s leading professional orchestras including The BBC Philharmonic, The Royal Liverpool Philharmonic, The Hallé Orchestra, English National Opera, English National Ballet, Opera North, Manchester Camerata and Aurora Orchestra. He currently holds a bassoon chair with the Chineke! Orchestra where he plays both orchestral and chamber works by mainstream and under-represented composers.

A facet of his career that he particularly enjoys is broadcasting. He regularly presents orchestral concerts for BBC Radio 3 and has fronted the show Sounds Connected and Music Matters. He is the presenter for Radio 3’s Classical Fix show and has appeared on Scala Radio also and presented for BBC television documentaries.

A passionate advocate for equality, Linton has served on the Musicians Union equalities committee for over 5 years and, since 2020 was elected chair of this committee. He also works as a consultant within the arts and further afield on the subjects of diversity and inclusion. Clients have included BBC Philharmonic/NOW/Scottish/Symphony, CBSO, Ulster Orchestra, Association of British Orchestras and NBC film studios. He is on the change committee for the global music publisher Hal Leonard.

Linton also holds the position of Artistic Associate with The Multi-Story Orchestra. An organisation whose vision of inclusivity and artistic collaboration he strongly believes in.

He is an Artist In Residence with Ark Schools with whom he teaches and coaches young musicians. He’s also given workshops for students at the Royal Northern College of Music and for bassoonists of the National Youth Orchestra of Great Britain.

In 2021 Linton joined the board of governors for both Chethams School of Music and the Orion Orchestra.