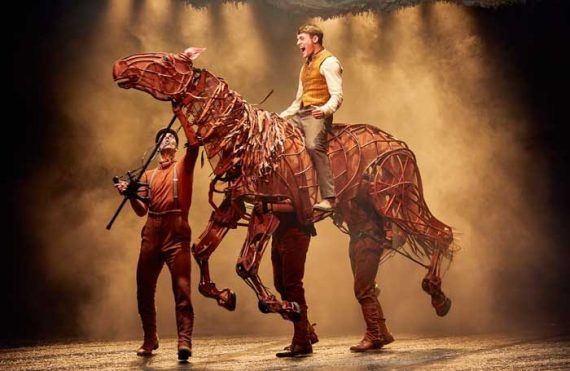 This weekend Chetham’s students are helping to mark the Armistice in school and across the region. Young brass players performed at Victoria Station; violinist Faye Lam played Vaughan Williams’ The Lark Ascending at a major orchestral event in Preston, and boarders gathered on the yard at 11am on Remembrance Sunday as a lone trumpeter played The Last Post.

Fact: Puppets are pathetic. Nobody, be he a king or a beggar likes to watch a puppet show. Needless to say, I was not surprised in the slightest when the class chorused in concealed cries, for we were to watch a two-and-a-half hour play with PUPPETS as the main characters. However, humans unearth unexpected wonders all the time, and just as Harry Potter learned about science, then discovered his ‘magic’, we, with our scientific-pathetic-puppet theories, found the ‘magic’ of War Horse.

Although we knew that the puppets in War Horse were wooden and inanimate, we all believed that the horses and goose puppets were alive during the entire tow-and-a-half hours of that fantasy world of the theatre. Even though the puppeteers of the horse named Joey could be have been dressed in clothes more similar to Joey’s colouring and there was a small loss of detail from Joey’s legs – which are meant to be adorned with four white socks – there are not other complaints about the puppets (some of the audience fervently adoring the goose puppet), since very movement and ‘neigh’ of the puppeteers were flawless, causing no small amount of tears.

Not only were the puppets precise, but the actors’ reactions to the puppets was what made the audience empathise, as the actors talked to the puppets as if they were real. Nevertheless, the actors won less praise to my class than the puppets did; I believe this was because the pace was a little lazy (perhaps because of the cast’s familiarity with the play) and the overdramatic reactions of Emily (the French girl) and Frederick (the German soldier), such as shrieking every time they were within four metres of each other.

In spite of this, the actors were admired for their inventive use of a minimalist set, for example, they turned four wooden poles into realistic farmer tools, gates, barriers, and even weapons, with seemingly ache-less arms. In addition to this, the actors used space in an effective way; when they actors froze whilst another scene was being played, the audience was also frozen into silence. Despite this, the audience had mixed feelings on the ‘no more than required’ style cloud in the background which showed the setting of the scene, some saying that it was hard to make out the setting since the cloud was so small, yet the majority agreeing that they enjoyed how bare yet detailed the set was.

Perhaps the set and stage was bare, but the lighting, sounds and special effects were popular among the audience. Even though furious flashes of light and gory gun bangs shocked the audience into horror, this managed to make the audience remember WWI’s gruesome history, which added interest to the play. However, some people found the gunshots crackly which proves that the technology used was not perfect. The again, these people do tend to be the ones nit-picking at the details, since otherwise the costumes and makeup were realistic, especially the long scar on a German soldier and the old fashioned uniforms.

Moreover, the play incorporated symbolic meanings, the most obvious being the blood of the soldiers blooming into poppies on the cloud screen mentioned earlier. Poppies have long been associated with peace in death and resurrection and eternal life, which seems fitting to remember the soldiers’ lives. Another glimpse of symbolism in War Horse is the colour of the horse Joey’s coat which is red, like blood. Could this be foreboding? Joey also represents the effect of war on humanity, for example, in the play, two soldiers argue about Joey, one believing that the horses are better than men and kinder, more heroic, whilst the other counters that they’re simple creatures, “controlled by a very little brain that can’t think beyond food and drink.” War brings out the best and worst of humankind, the heroes, the wretched, the ones trying to survive.

Though War Horse‘s plot was clear and easy to understand thanks to the simple dialect and dates on the background, the opinion of many was that, because there was so much detail in the plot, the clarity of storytelling was a little…unclear. For this reason, narration was suggested by some to add to the story, which would bring the audience a deeper understanding of the brilliant performances.

All in all, War Horse is a priceless, NOT pathetic performance with a thoughtful, stunning flair. And that is a FACT.