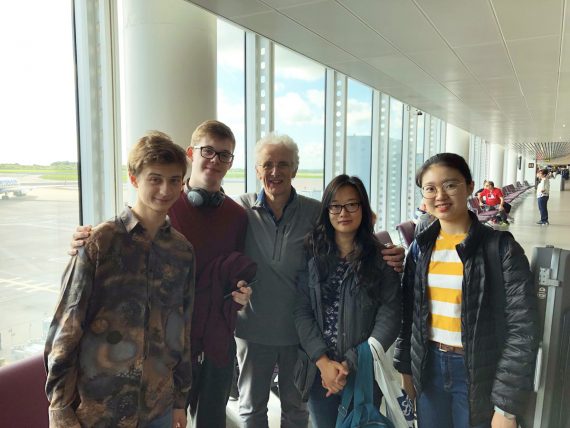 This morning a group of five from Chetham’s set off for Shanghai and Wuhan, where three students will perform alongside professional artists from Manchester Camerata and where Alun Jones and Stephen Threlfall will meet up with partners from China and Manchester.

The trip is the next phase in a five-year collaboration with Manchester Camerata to perform and record all of Mozart’s piano concertos, bringing together eminent pianist Jean-Efflam Bavouzet and Camerata Music Director, Gábor Takács-Nagy, to perform at The Stoller Hall. Students from Chetham’s will perform alongside the professional orchestra in each of these performances, building their professional performance experience and creating a bridge between two generations of musicians. The project began last Thursday 6 September when three Chetham’s Sixth Formers – Leo Strelle, Molin Han and Oskar Herfurth – joined Gábor, Jean-Efflam and the orchestra for Mozart’s Overture to Don Giovanni, two piano concertos, and his ‘Jupiter’ symphony. Also featured in the concert was a brand new composition by Harry Harrison, who left the School in summer 2018; this specially commissioned piece, Belt and Road, celebrates the transformational trade initiative between China and the UK and will be performed again in both cities on the China tour.

The finished recordings, supported by Chandos, will be the first to berecorded in Manchester alongside the opera overtures – a unique legacy. Only a handful of artists and orchestras have embarked on this in the world (Barenboim, Brendel, Perahia, Ashkenazy and Mitsuko Uschida).

Chetham’s involvement will continue over the full five years, with a quartet of students joining Manchester Camerata to bring to life each of the series of concertos. Eight quartets will also receive up-close masterclasses from Gábor every year, a fantastic opportunity to learn from one of the world’s leading chamber music coaches.

This partnership offers artistic and educational, audience and reputational benefits over a minimum of five years. It celebrates the inspirational leadership of Gábor Takács-Nagy for the next generation, creating an environment in which world-class musicians and the next generation of talent can inspire and develop each other.

Chetham’s and Manchester Camerata are committed to delivering this project over the next five years, performing all of Mozart’s incredible piano concertos, paired with his largely unknown, but equally extraordinary, Opera Overtures at The Stoller Hall. This is a significant undertaking and will require investment and support in order to be realised. We are already over a third of the way to reaching the required £320,000 target and are now looking to secure the future of the project.

If you feel you can help in any way, or would like to learn more about the project, please do get in touch to arrange a time for us to talk with you further (see contact details below) – we would love to hear from you.