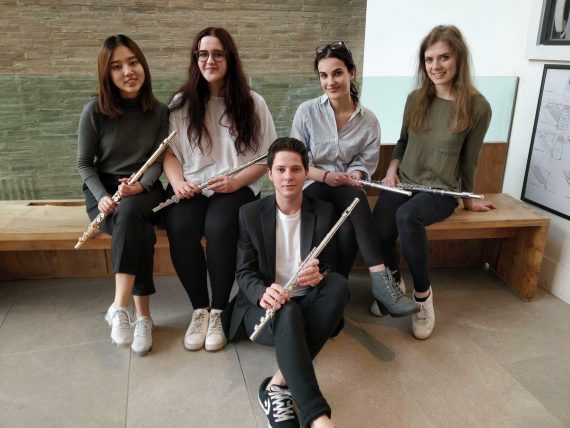 Five flute students completed their education at Chetham’s School of Music in 2018, all progressing to hugely successful higher education at leading international conservatoires. Their achievements demonstrate their own commitment to learning and practice, but also prove the impact of a specialist music education in which every student, from 8 to 18 years old, enjoys an individual, structured timetable designed to develop and challenge their personal musical development. As one student told us recently, “At Chetham’s, every day’s a Saturday” – rather than waiting until the weekend for music sessions and youth orchestras, our students enjoy individual lessons, chamber music tuition, performance classes, music theory, choir and supported practice sessions within the daily timetable, placing music at the very heart of daily life.

Over seven years at Chetham’s, Beth Stone has also performed as a member of the National Youth Orchestra of Great Britain and was an EMI Foundation Scholarship Winner in 2017. Beth studied with Rachel Forgrieve and Dr Martyn Shaw and will continue next year at the Royal College of Music, where she will be joint principal study Modern and Baroque Flute:

“Studying flute at Chetham’s for seven years has completely changed my playing. Through my time at Chetham’s I have had the opportunity to work with all of the flute teachers within the department, through lessons, classes and coaching. With the addition of masterclasses from world-renowned flautists, we’re constantly inspired to follow our dreams. I certainly would not be where I am today without the tuition & opportunities that are offered at Chetham’s” – Beth Stone, year 13 How does our timetable support young musicians’ development?

There’s not one timetable at Chetham’s, but 300 – a unique schedule for every student, centred around their individual interests and passions. So whilst one flautist might combine orchestral playing with Baroque music, another might take up Jazz, composition, or take a second study in a contrasting instrumental department. The timetable begins with two hours of individual teaching on first and second study instruments, but that’s just the beginning – classes, lessons and concerts combine to make music around one third of the Chetham’s timetable.

In addition to core instrumental teaching, flute students of all ages take part in:

The School’s flagship ensemble is Chetham’s Symphony Orchestra, which performs three programmes each year in Manchester, Lancaster, London and elsewhere, often with guest artists or conductors. Younger flautists may also join Chetham’s Sinfonia, the Middle School orchestra, Chamber or Wind Orchestra, or Wind Band.
Many woodwind students explore Baroque music and historical performance, with regular concerts in the School’s medieval Baronial Hall, at Greenwich Early Music Festival, and across northern England. And for solo repertoire, five or more Lunchtime Concerts every week, and a regular programme of chamber music and solo concerts across the region, give students of all ages the chance to develop their performance skills in front of a public audience.

A tradition of success

This year’s leavers follow a strong tradition of success within the flute department, and across Chetham’s as a whole.

Adam Walker is Principal Flute at London Symphony Orchestra, and returned to lead a masterclass with current students in 2018. In Manchester, Amina Hussain plays with Manchester Camerata and Sarah Bennett with the Hallé. In competition, Silvija Scerbaviciute won the Friedrich Kuhlau Flute Competition 2016, and two players, Lucy Driver and Joanne Lee, won the Woodwind Category Finals of the BBC Young Musician competition the same year.  And to prove that Chetham’s leavers remain part of the school community throughout their careers, Dr Martyn Shaw and Katherine Bryan both joined the school as students and now teach the next generation of players.

Auditions, and informal advice auditions, can be booked throughout the school year from September to June. Young flautists and their families are also welcome at a series of Open Days, with the next one taking place on Saturday 6 October 2018. Find out more about studying at Chetham’s, how to apply, and funding through the Music and Dance Scheme, by exploring our website.