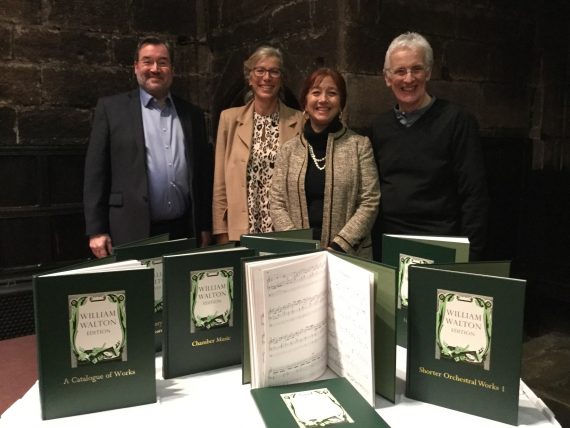 The School was delighted to welcome Dr. Alessandra Vinciguerra, President of the Foundation and Director of the Gardens of La Mortella on the island of Ischia in the Gulf of Naples, which was the home of Sir William and Lady Susanna Walton for many years. She was joined by Caroline Howard, who is responsible for the summer season of youth concerts in the Gardens, in visiting the School to present the set of Walton’s music to the Music Department.

Chetham’s friendship with the William Walton Foundation, and Lady Susanna in particular, dates back to the late 1990s when the School’s students performed for the third time at the Oldham Walton Festival. Their landmark performance of Walton’s Cello Concerto with soloist Ben Birtle, and Henry V: A Shakespeare Scenario, conducted by Stephen Threlfall with his brother David Threlfall as narrator, sparked a friendship with the Trust which has continued over many years. Since then, Chetham’s students have made numerous visits to the island of Ischia to perform both solo and chamber repertoire, most recently in the summer of 2016, when the Chamber Orchestra performed Prokofiev’s Peter and the Wolf with Giovanni Visentin of Inspector Montalbano fame.

During their visit to Manchester, Alessandra and Caroline heard three of the six bagatelles that Walton composed in Ischia for the guitarist, Julian Breem, performed by student Henry Rubiano Poveda, age 17.

Stephen Threlfall, Director of Music, commented, “This hugely generous gift is something that I will personally treasure. I am delighted to accept the scores on behalf of the school, as a lasting reminder of the friendship that exists between Chetham’s and La Mortella. We have given as many as 30 concerts featuring Walton’s music over the years, and it remains an honour and a privilege for us to have been regular visitors to Ischia, and part of a special event celebrating the life of Lady Susanna in London. I am delighted that this friendship will continue into the coming years, with two performances by Chetham’s students in the concert hall at La Mortella in June 2018, and a return visit by the Chamber Orchestra the following summer as part of our own 50th Anniversary celebrations.”