A Tribute to Mr Glyn Jones 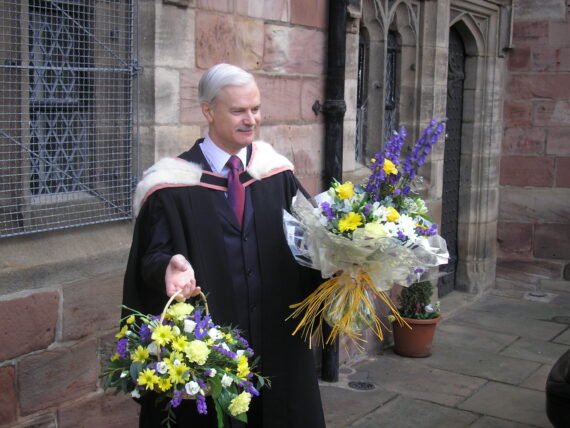 Over the Christmas and New Year break we were stunned to learn of the unexpected death, at the age of 76 of Mr Glyn Jones. In an illustrious teaching career spanning 32 years, he rose from being a teacher of Maths to Head of Maths, then to Senior Master and most recently Deputy Head before retiring in 2007. However, in the 15 years since then, and right up until last month, he has remained on the staff providing supply cover, as well as being an ardent supporter of the School by attending concerts and through his membership of the Humphrey Chetham Club.

Glyn was renowned for being a teacher who had an instinctive rapport with students – he could relate to all ability levels, and get the students the grades they needed. He was equally at home with a bottom set of 13-year-olds as he was teaching further mathematics to 18-year-olds about to embark on university careers. And Glyn never lost his love of imparting knowledge and stretching minds. Even last term he returned part-time to do some learning support with individual students, and he excelled at it because he had a knack of explaining things in a way they could grasp. And he achieved the perfect balance of formality and warmth – friendly but not overly familiar – he never needed to raise his voice with anybody. He was the ultimate role model.

As Senior Master and Deputy Head, Glyn basically kept Chetham’s running. Every day, staff and students had their lives organised for them by Glyn’s lists. Supervision rosters, cover for absent staff, exams, both internal and external, and the three keynote events which marked the year: Christmas Music, Founder’s Day and the Prize Giving and Leavers’ Services were all masterminded with a forensic eye for detail, and all without the benefit of computers in the early years.

For the staff, he was there at every stage, cradle to grave: he inducted us in the somewhat monastic, certainly anachronistic rituals of the school; he listened to staff meetings and took notes so we didn’t have to; he arranged cover when we were absent, and rewarded us with vouchers when we did more cover than we were supposed to; he organised the post-event drinks for staff, and he arranged collections and wrote speeches for us when we moved on.

And on a day-to-day level he was never the arms-length manager – he would be there in the staff room first thing in the morning, he would ring the bell if we forgot; he would then be there doing crossword duty at lunchtime, he would be there in tea at half-past four, helping out whoever was on duty, or simply having a chat with his colleagues or students.

When he ‘retired’, after 32 magnificent years, such was the plethora of ‘mission critical’ roles he fulfilled, that he was replaced not by one person but by four or five. And he proved that you never truly leave Chetham’s if you don’t want to, as he became a regular fixture in the ‘supply army’, even during the Covid-19 pandemic, despite the obvious risks to his health. He re-joined the maths department three times over the last 15 years to fill in gaps in the staffing, most recently in 2021 to cover GCSE and A level including Further Maths. But far from taking the easy option and resting on his laurels, he took great pleasure at dusting off his old notes, and bringing them up to date to match the new specifications.

In summary, Glyn was loved and respected universally, by staff, students, parents and the wider community. He embodied the ethic of service and commitment, and he combined a cool logic and sharp intellect with warmth and empathy. He was an absolute rock of reliable, caring and calm support in so many ways for so many people, and after over 47 years’ association with the School we will certainly miss him.