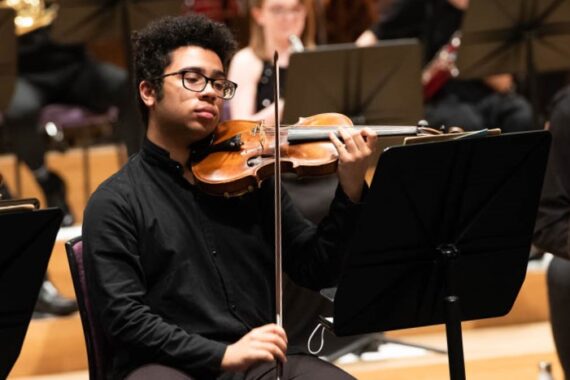 On Friday 8 July 2022, more than 200 of our incredible young students will perform for Chetham’s Symphony Orchestra and Chorus at The Bridgewater Hall. Jordan Brooks will perform the solo for Korngold’s violin concerto. We caught up with Jordan ahead of the concert.

Tell us about your background prior to starting at Chetham’s?

I grew up in Cape Town South Africa and started violin lessons at the age of 7 at the Beau Soleil Music Centre. I went to Westerford High School from 2017 and also joined the youth development program of the Cape Philharmonic Orchestra where I was concert master of the youth orchestra. From 2017-2020, I was fortunate enough to perform solo recitals in many different venues in Cape Town, I participated in chamber music festivals, won a couple of competitions and played solo with the Cape Town Philharmonic.

What first inspired you to play the violin?

When I first saw the violin on TV I was very fascinated by the sound and shape. When I started violin I could not stop playing on it. At that time, it was still strong hobby and it was slowly becoming a passion. What really inspired me was when I watched a performance of Sarah Chang playing the Sibelius Violin Concerto. That was when my eyes opened and showed me that the violin can do many things. This motivated me so much as I wanted to get to that level of playing. The more I practiced, the more connected I felt to my instrument.

Tell us about some of your favourite memories of your time at Chetham’s?

There are many! Musical ones include: collaborating with Manchester Collective, participating in all the music courses, and doing interesting chamber music projects with the Barret Due Institute in Norway.

Jazz and curry nights have been the best socials of the year. Muck up day was definitely a highlight too.

How important do you think Chetham’s Symphony Orchestra is for developing the future generations of world-class musicians?

Performing with Chetham’s Symphony Orchestra gives many students the opportunity to play standard orchestral repertoire. It  improves vital listening and communication skills. And it gives students a taste of what orchestral life could be like if as a future job.

Orchestral playing can sometimes be more challenging than solo playing. As a string player, playing in a string section requires heavy amounts of listening for intonation as a collective and not as an individual. The entire string section needs to look synchronized in bowing, as well as what part of the bow they are playing. It is very pleasing to an audience member to see such unity. To an extent, these factors help with individual solo playing too.

What advice would you give to younger students at Chetham’s?

Enjoy every moment of your time at Chetham’s. Cherish the friendships you have. Embrace every musical experience that comes up, and consume as much information you can. Remember to not be too hard on yourself and remember to express yourself as confidently as you can as a musician.

Tell us one musical piece that you would love to play again and why?

I would love to play the Schoenberg Verklarte Nacht with Chetham’s Symphony Orchestra strings. We played it during the last summer music course. It was one of the most challenging works for string ensemble and everyone played with passion and commitment. The energy in the room was electrical and bought tears to a few audience members.

Tell us how you’re feeling about your upcoming performance in The Bridgewater Hall?

I am extremely excited and humbled to perform in The Bridgewater Hall. I am also a little bit sad as it will be my last performance at Chets.

Why did you choose the Korngold violin concerto?

Korngold’s violin concerto is a piece of music filled a variety of unique aspects. It is a concerto that merges the composer’s 20th century Hollywood film music influences with Western Classical music ideas, one of them being a concerto with a fast-slow-fast structure. These two ideas combined create a space for endless amounts of expressivity and opens the imagination of the performer and the listeners. The Korngold concerto allows me to play to the extremes of my instrument. It is the best piece to show who I am as a musician.

What are your plans for next year/the future?

I will be studying at The Royal College of Music. There are also a couple of exciting musical projects which I will be part of in UK and in South Africa.

Tell us what audiences should expect when you take to the stage with Chetham’s Symphony Orchestra?

A musical journey of your own imagination!

Jordan will perform, with 200 of his fellow students, for Chetham’s Symphony Orchestra and Chorus at The Bridgewater Hall on Friday 8 July.