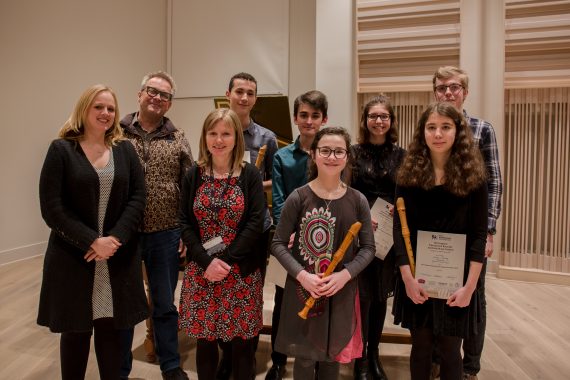 Three of our talented recorder students, Alastair Niven, 16, Anna Williams, 13, and Mabel Dalgleish-King, 12, were selected to take part in the Birmingham International Recorder Competition. On reaching the final Alastair gave a magnificent performance of works by Detri, Telemann and Chiel Meijering. Congratulations to Alastair, Anna and Mabel on your achievements!

Chetham’s recorder tutor Chris Orton was on hand to give encouragement to our performers, and was also involved in the festival where he gave a number of recorder masterclasses to delegates. Since winning the Moeck/SRP International Solo Recorder Competition in 2007, Chris Orton has developed an international reputation as a recorder soloist, conductor and educator. Alongside his work at Chetham’s, Chris teaches at the Royal Birmingham Conservatoire and Royal Northern College of Music, where he is the principal recorder teacher, and conducts the National Youth Recorder Orchestra.

“The opportunities at Chetham’s are second to none – as well as our wooden professional standard bass and great bass recorders by Yamaha, we also own and use a beautiful Renaissance consort hand built as a set by master maker Tom Prescott. The students explore solo, consort and mixed ensemble performance opportunities, work with young composers and learn how to play with live electronics and improvise in free and pastiche styles. A particular highlight is our involvement at the Royal Greenwich International Early Music Festival, where Chetham’s recorder players have performed for the last three years as part of our flourishing Historical Performance Programme.” Chris Orton