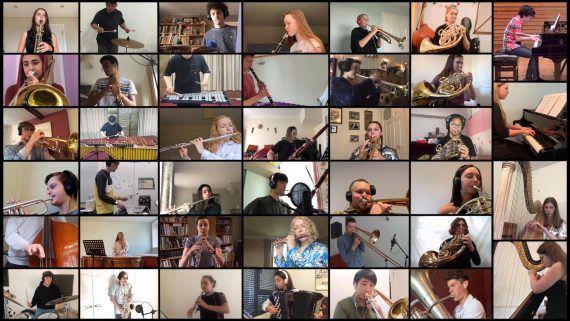 To mark the 40th anniversary of the government’s Music and Dance Scheme (MDS), young musicians from the UK’s five specialist music schools are set to release the results of an unprecedented collaboration, written and performed during lockdown.

A new virtual orchestra brings together around 80 young musicians – aged 15 to 18 – who currently study at the UK’s five specialist music schools: Chetham’s School of Music in Manchester, St Mary’s Music School in Edinburgh, The Purcell School in Hertfordshire, Wells Cathedral Music School in Somerset and the Yehudi Menuhin School in Surrey.

This is the first time that five separate orchestras, located hundreds of miles apart, have been able to collaborate so successfully, and on such a large scale. Lockdown has not stopped these exceptionally creative young performers from creating something special.

The pupils recorded their own individual parts of a new piece, specially written for them by Gwilym Simcock, who has been critically acclaimed at home and abroad as one of the most gifted pianists and imaginative composers working in Europe today. He has toured extensively with the cream of British and international jazz artists; and he has performed with orchestras, choirs, big bands, dancers, and with musicians from diverse backgrounds including the classical, jazz, folk and rock traditions. His debut album “Perception” was nominated for Best Album in the BBC Jazz Awards 2008 and his 2011 album “Good Days At Schloss Elmau” was one of the twelve nominees for the Mercury Music Prize.

Established in 1981, the UK government’s Music and Dance Scheme (MDS) allows talented young performers to fulfil their potential, regardless of their financial background, by funding world-class specialist training at one of the UK’s famous five specialist music schools. The scheme has provided a vital for many of the country‘s finest classical musicians, such as Martin Bartlett, Nicola Benedetti, Jacob Collier and Steven Osborne.

Composer Gwilym Simcock is himself one of many acclaimed musical graduates from the MDS funded system, having studied at Chetham’s School of Music.

His new piece of music, called Union Overture and Celebration, was specially composed for this joint project. The piece will be broadcast for the first time at 10am on Wednesday 19 August, simultaneously launching on the YouTube channels for all five of the specialist schools:

Union Overture and Celebration, composed by Gwilym Simcock, performed by Chetham's students alongside young musicians from the UK's other leading music schools.

“Union Overture was an exciting project for me, that drew upon the unique set of skills that students learn at the specialist music schools in the UK. The piece was written in two weeks, and then the students had just two weeks to learn and record their parts, before I combined them together into the finished recording. The skills required for the musicians to do this are ones that they’ll need for the rest of their careers in music, and there really aren’t any better places in the world than these fantastic musical institutions here in the U.K. for them to learn their trade in such depth and to such a high standard. I really hope that audiences enjoy the piece, and the hard work all these students have put in to make it possible.”

A spokesperson for the five MDS schools said:

“The UK’s five specialist music schools all have celebrated youth orchestras, but never before have we collaborated together like this. Now is a special moment, as we join forces and begin to mark the 40th anniversary of the UK government’s MDS funding. This support has been vital to so many of our finest classical musicians. We must now do even more to widen this access and we hope new performances like this will start to raise broader awareness of the scheme.”