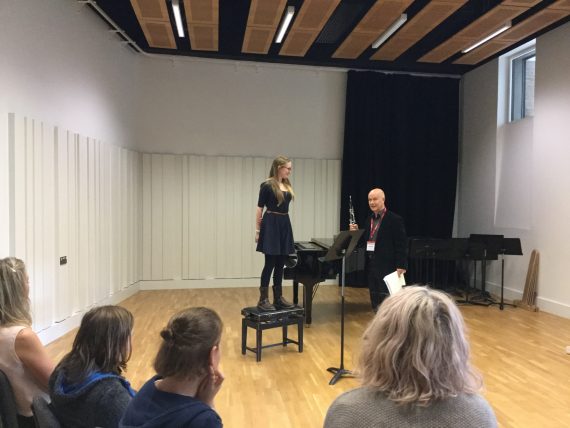 In late September staff, students and an alumnus from the Royal Conservatoire of Scotland visited Chetham’s.  We were thrilled to be joined by internationally renowned woodwind professionals and RCS lecturers, clarinetist John Cushing and oboist Stephen West for a day of concerts, masterclasses and seminars. John and Stephen were joined by their students Pawel Jaworski and Sergio Vega Dominguez, and conservatoire graduate Lauryna Sableviciute.

The event began with a spell-binding public Lunchtime Concert given by RCS post-graduate oboist Sergio Vega Dominguez, clarinetist Pawel Jaworski and pianist Lauryna Sableviciute. The eclectic programme included works by Cimarosa, Silvestrini, Bliss and Mozart. For the finale Pawel and Lauryna were joined by John Cushing in a stunning performance of Istvan Kohan’s Konzertstück a lá Feidman.

Inspired by the Lunchtime Concert, Chetham’s oboists and clarinettists performed in an afternoon of masterclasses with John Cushing and Stephen West.  Many thanks to Lauryna for being on hand to accompany our oboists! A fantastic opportunity to perform for two of Europe’s leading woodwind performers and educators.

“‘Don’t be afraid to blow down the instrument….Tell your fingers to behave’: Such simple instructions that have given me a new perspective on playing the oboe!’” – Edward, Year 9

The day ended with a question and answer session for our upper-school students, focussing on conservatoire auditions, processes and preparation.  It was wonderful to hear the RCS staff and students talk so passionately about their programmes of study.  Most striking of all was the focus upon developing each student as an individual – a shared goal with our work at Chetham’s.

“We had a fabulous day and loved working with your students. The students seemed happy and well supported and it was a pleasure to meet you all. – Stephen West, Oboe Tutor, Royal Conservatoire of Scotland

Thank you RCS for a fantastic day, and we look forward to our exciting future collaborations.