My experience of competing in BBC Young Musician – Sofía Patterson-Guitiérrez 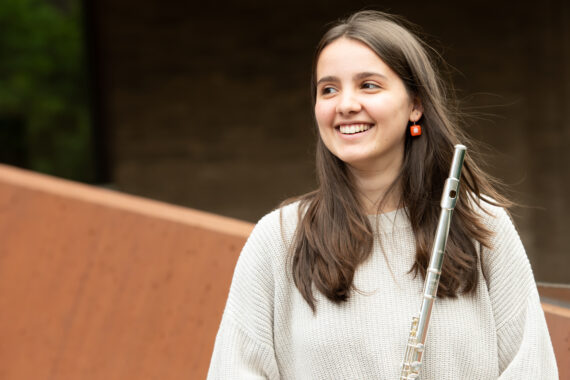 Sofía is in Year 13 at Chetham’s and has studied the flute with us since she was in Year 8. In 2022, she took part in the BBC Young Musician competition, making it all the way to the Grand Final, which was televised in October.

The competition sees young musicians from around the UK strive to be crowned Young Musician of the Year, with the final two rounds televised on BBC. In its 38 years on air, it has seen numerous Chetham’s students take part and even some winners including Peter Moore, Jennifer Pike, and Guy Johnston.

Tell us about your background prior to starting at Chetham’s

I was born in Cambridge but at the age of three moved to Stockport where my Dad is originally from. My mum is from Madrid, Spain, and I’ve grown up bilingual. Both my older brothers started learning instruments through our primary school in Bramhall, Stockport, so I just had to copy them and picked up the flute when I was 8. My teacher there, Vicky Sunderland, (who also taught my brothers the saxophone and clarinet) inspired me to carry on and join Stockport Music Service bands. At the same time I started learning the piano and even tried the cello for a bit before deciding to focus mainly on the flute. I began with playing with my school band and eventually joining the Greater Manchester Youth Wind Orchestra and Stockport Youth Orchestra. I then gained a place at Chetham’s at the age of 12, beginning to learn with Fiona Fulton who has been a huge inspiration to me ever since.

What first inspired you to play the flute?

I don’t remember having a special moment that made me want to play the flute in particular, although I did want to play the saxophone but was told it would be too heavy for me at the time (I was 8)! But ever since I picked up the flute I’ve loved it and can’t imagine not playing it now.

Tell us about your experience in the BBC Young Musician competition

The competition was really about a year long, which is crazy when you think about it because you can improve a lot from preparing for the first audition to then competing in the final, so there were a lot of ups and downs but competing really made me think about the type of music I love to play and each stage pushed me immensely.

I couldn’t really believe it when I found out I’d won the category final because I knew the rest of the competitors well (from NYO and school) and knew how amazing they all are. But I tried not to let that affect me when I played and, although I was really nervous for the performance, I took a lot of comfort in the fact that my accompanist, Martyn Parkes, was performing with me and tried to focus on just making music.

The final was something that I don’t think I could’ve fully prepared for as it was unlike anything I’d done before, but the orchestra made rehearsing with them feel very natural since everyone was so smiley and encouraging! The conductor, Mark Wigglesworth, was so welcoming and was always listening to what I wanted to do as much as his instincts with the music which made working with him very easy and enjoyable.

It was very hard to ignore the cameras whirling around the stage in the final which made the performance more nerve-wracking because sometimes it felt as though they were really close, but on the whole I didn’t really notice them and the experience was very rewarding. 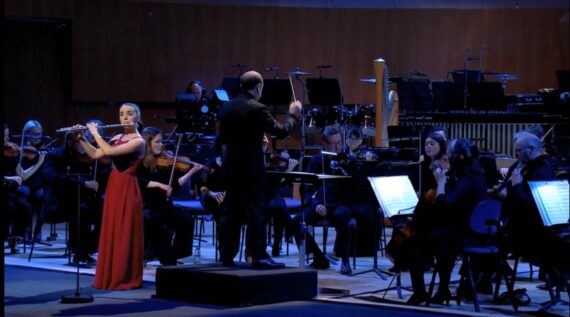 Why did you choose to perform the Ibert concerto?

I chose the Ibert concerto because it was an exciting challenge to learn (especially the first and third movements which have so many fun and cheeky moments) but probably mainly because the second movement just sold it to me. The second movement is for me one of the most beautiful pieces of music I’ve ever played because of the raw emotions that it evokes as well as the moments of pure, simple reflection. So of course, I couldn’t give up the opportunity to play it with the BBC Philharmonic in the Bridgewater Hall!

What was your favourite thing about taking part in the competition?

Definitely meeting the orchestra and playing with them – I was amazed at how approachable they were when rehearsing and how enjoyable the whole process was. To be honest, I loved the whole experience outside of performing as well – meeting all the BBC crew, travelling to Saffron Walden and using the space in Bridgewater Hall was so much fun.

What advice would you give to someone who is thinking of taking part in the competition in future?

I’d advise someone taking part in the competition to really think about your whole programme and make sure that you really do love each piece that you’ve picked, but also how they fit together.

If I were to compete again, I would try to put less pressure on myself (which is always easier said than done) and not be overly critical when preparing for the performances, because at the end of the day it’s about enjoying making the music that you love.

What are you hoping to do next year, after leaving Chetham’s?

I’m currently applying to conservatoires in London and hope to be there next September, fingers crossed…

You can watch some clips of Sofía’s performances on the BBC website using the link below: