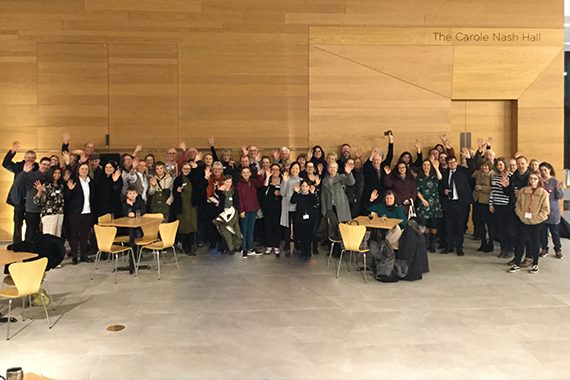 A year of events to mark Chetham’s 50th Anniversary year is already underway, launched by Chetham’s students, staff and parents, past and present, and continuing with the first of fifty concerts in this special year. We’ve also enjoyed meeting former students from across the years to take part in the 50 Portraits series, with the first batch now on display in the Oglesby Atrium.

Alongside our regular Open Day on Saturday 19 January, we invited former staff and students to explore Chetham’s alongside our prospective pupils. Uniquely, the Open Day provides a space for visitors to explore the school independently, to sit in on rehearsals and performance classes, and to chat to music and academic staff as well as fellow visitors. After the Open Day we were delighted that a group of alumni remained for drinks in the Medieval Buildings and, by all accounts, for several hours afterwards in neighbouring bars!

On Sunday, a larger group gathered onstage to sing Karl Orff’s Carmina Burana under the direction of Stephen Threlfall. Many of them warned us they might be rusty, but they succeeded in rehearsing the entire work and performing it to a gathering of family and friends before the end of the day! Huge thanks to everybody who was involved, and especially to our Percussion Department, and to piano alumnae Lulu Yang and Jill Fogden, who supported them instrumentally; and to three singers from RNCM who joined us for the solo lines.

We’ll next be meeting up with alumni in the Marylebone pub in London on Friday 15 February, after Chetham’s Symphony Orchestra perform at the Royal Academy of Music – we look forward to seeing even more familiar faces next month!

Find out more about Chetham’s alumni

The first of fifty concerts in our anniversary season took place last night, Tuesday 22 January. The Gould Piano Trio were joined by clarinettist Robert Plane and composer Huw Watkins for a pre-concert talk – between them representing three alumni, one Summer School tutor, and two former parents! the concert itself featured works by Sally Beamish – tying into our This Woman’s Work celebration of women composers – Pierre Boulez and Shostakovich, as well as Huw Watkins’ Four Fables in its North West premiere. And their involvement didn’t end there – Huw and Robert remained on Wednesday to lead masterclasses with composition and clarinet students, as Chetham’s musical family travels down the generations.

Our Fifty Concerts series continues with visits from former students Leon McCawley, Jiafeng Chen, Marcus Farnsworth and Ruby Hughes within the next month, as well as student performances in Manchester and London for our Spring Music Weeek.

Find out more about our Anniversary Concert Series

Throughout the autumn, photographer Sara Porter has been meeting alumni in Manchester and London to capture this unique moment in Chetham’s history. The images will be displayed in the Atrium throughout the year, with the first batch going on show in time for the Reunion Weekend. Huge thanks to everyone who’s been involved so far, or who is on the list for the final photography sessions this year – keep an eye on our social media, and Sara’s website, as new  portraits emerge from the editing suite!

Take a look at the 50 Portraits so far

Over the last fifty years, Chetham’s has played a significant role in nurturing the future of the nation’s music culture. We have an ambitious fundraising target of £500,000 to raise across 2019, securing the same quality of education and creativity for years to come.

Our thanks to the supporters who have already helped us, if you’d like to make a gift to our 50th Anniversary Fund, please go to this page or contact the Development Team.

Gift Aid it – If you’re a UK taxpayer you could increase the value of your gift by allowing us to claim back 25p for every £1 you give by joining the Gift Aid scheme. And it’s at no cost to you.  Gift Aid allows us to reclaim from the Government the tax on your donation.