A celebration of friendship for Chetham’s Spring Music 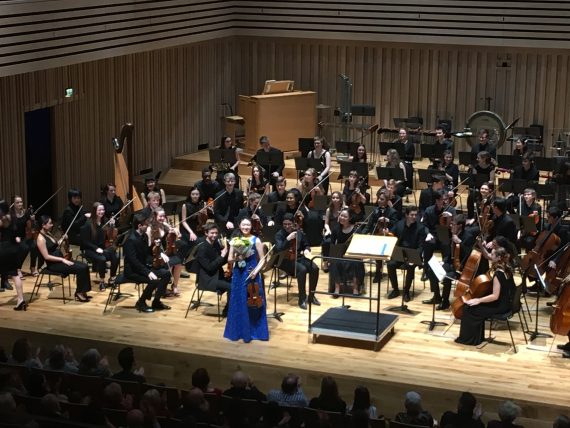 Spring Music week is always an exciting time of year. As the new season dawns, students lay aside their text books and spend a week in rehearsals with our various larger ensembles, preparing for a series of concerts in school and across the UK.

This year was a particular momentous one, marking the first performances of Chetham’s 50th anniversary year for our two orchestras, Sax Choir, Wind Band and Violetta Strings, as well as for singers in an innovative new take on ‘Opera Extracts’.

Sixth Form Singers: the Drama of the Oratorio

It was the singers who started the week on Sunday 10 February, giving two performances of Margaret McDonald’s reduced version of Mendelssohn’s Elijah. Semi-staged, and taking place for the first time in the Carole Nash Hall to take advantage of our new building’s lighting equipment and projection, it told the entire tale in miniature, drawing out all the drama of the original oratorio. Our thanks to the many students and staff who helped bring it together!

Next up were our smaller groups and younger ensembles. The Sax Choir, under Andy Wilson, gave the North West première of Ivor McGregor’s Film Noir – to be performed again at our forthcoming Saxophone Day for players of all ages. Violetta Strings, our youngest ensemble led by Dr Owen Cox, performed popular selections by Karl Jenkins, Britten, Bizet and Grieg, ending with the mounting excitement of In the Hall of the Mountain King. Next were Wind Band with David Chatterton, performing Woolfenden’s Illyrian Dances, and after the interval our Middle School orchestra, Chetham’s Sinfonia took to the stage.

Bassoonist George Bailey, 13,  was one of the recent winners of our Lower School Concerto Competition, and performed the first movement of Hummel’s Grand Concerto for Bassoon and Orchestra, to the pride of the numerous family and friends who filled The Stoller Hall and of his teacher, Ben Hudson, who dashed back from work in Yorkshire to ensure he wouldn’t miss it. After George’s well-deserved ovation, and flowers presented by little sister Jemima, Sinfonia closed the concert with Arnold’s Little Suite and Coates’ London Suite, conducted by David Chatterton and Nicholas Jones.

It wasn’t over yet! After inviting parents to join them in rehearsal at the weekend, and the public to sit alongside them onstage to explore the context and challenges of the programme, Chetham’s Symphony Orchestra performed in both Manchester and at the Royal Academy in London with Director of Music, Stephen Threlfall, at the helm. Their programme opened with Britten’s Four Sea Interludes and continued with Sibelius’ virtuosic Violin Concerto, performed by Molin Han. As an aside, that work was last played by the orchestra with a young Jiafeng Chen as soloist back in 2006; Jiafeng is now a tutor at the school, and performs the complete Beethoven Violin Sonatas and Piano Trios in six concerts across our anniversary year, joined by pianist Jianing Kong and our very own Head of Strings, Nicholas Jones, on cello.

Molin, meanwhile, is in her final year at Chetham’s, studying with Jan Repko. After many successes in her native China she joined the School for Sixth Form, and looks forward to continuing to the Royal College of Music in September. Her performance was met with huge applause, impressing audience members with her poise and expression.

Last was Edward Elgar’s Enigma Variations – a celebration of friendship through music, and the perfect piece to celebrate the many friends, supporters and allies who have been part of the School throughout its first half century. Our ability to challenge and support students as they reach new musical heights is down to every one of our students, staff, parents, alumni and donors, and it was those friendships which our orchestra expressed with such flair on, appropriately enough, St Valentine’s Day.

Students are now enjoying a well-deserved half term break, but not for long. Singers return tonight and tomorrow, for a weekend of song with former students Marcus Farnsworth and Ruby Hughes, as well as fellow students from the Royal Northern College of Music. For many of our orchestral players, it’s only a short break until our next concert on Sunday 10 March, a celebration of music and faith with Manchester Chamber Choir which includes music by Purcell, Handel, and Poulenc’s Organ Concerto performed by Chetham’s soloist, George Herbert.

For the rest, the next challenge is a mighty one indeed – Mahler’s magnificent Symphony No. 8, live on BBC Radio 3 from The Bridgewater Hall on Friday 5 July. We know it’s been performed by young players before, by the National Youth Orchestra and by the Gustav Mahler Youth Orchestra, conducted by former Chetham’s student Daniel Harding. But are we the first school to tackle it? Let us know in the comments if you’ve heard of such a feat before!